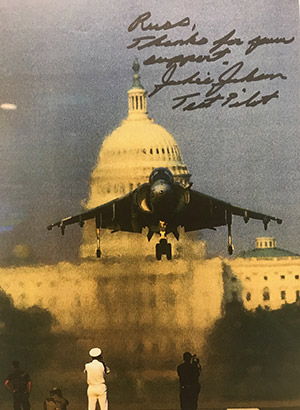 Last November, JetLease President Russ Dise was a special guest on KTRS talk radio 550 in St. Louis. Dise was interviewed by Jack Jackson, who was filling in on the Larry Connors USA show.

Jackson, a highly-decorated retired Marine lieutenant colonel and former test pilot, began by asking Dise to talk about his career and how he went from a Division One hockey player in Ohio to running the world's largest private aviation leasing company in Palm Beach.

Then the topic shifted to the state of the aviation business and what effect the recent Presidential election results has had.

"During the past eight years we've seen a huge devaluation of airplane assets," said Dise. "After the election of Trump, our phones lit up like a Christmas tree," he said. Dise told Jackson he expects an upturn both in his business and aviation in general under a Trump administration. (Since that interview, the stock market has hit record highs.)

A Message From The President
STAR Program Separates Us From The Competition
Let Us Get You The Best Deal On Your Next Plane
Find Out Why We Are The #1 Aircraft Leasing Co. In the World!
Who We Are And What We Do
Black Hawk Helicopters by JetLease